On World Ocean’s Day VESS, in conjunction with the Department of Environmental Protection and Conservation (DEPC) organised a coastal clean up and litter survey as part of the activities of National Environment Week.

We had a great turn out with lots of people coming along to help. Please see our post on VESS’s participation in National Environment Week for all the details of who took part. We have collected and compile all the data and the results are below:

Results from the 2017 Seafront clean up

Fifty five people removed 4588 pieces of rubbish  in three hours from the two parks along the waterfront of Port Vila on 8th June 2017. As you can see from the table to the left and the pie charts below, the majority of the rubbish is associated with food and drink. Presumably the rubbish is mainly from people using the parks and just dropping their litter on the ground when they have finished drinking or eating. There may be some rubbish that ends up in the park if it is thrown out of the window of a passing bus or car. The rubbish is mostly the same from both parks expect that in Fatumaru park we found a lot more glass bottles than in the Seafront park. The “other rubbish” category included items such as cigarette butts and paper. Plastic bags was the most common item found with food wrappers coming a close second. 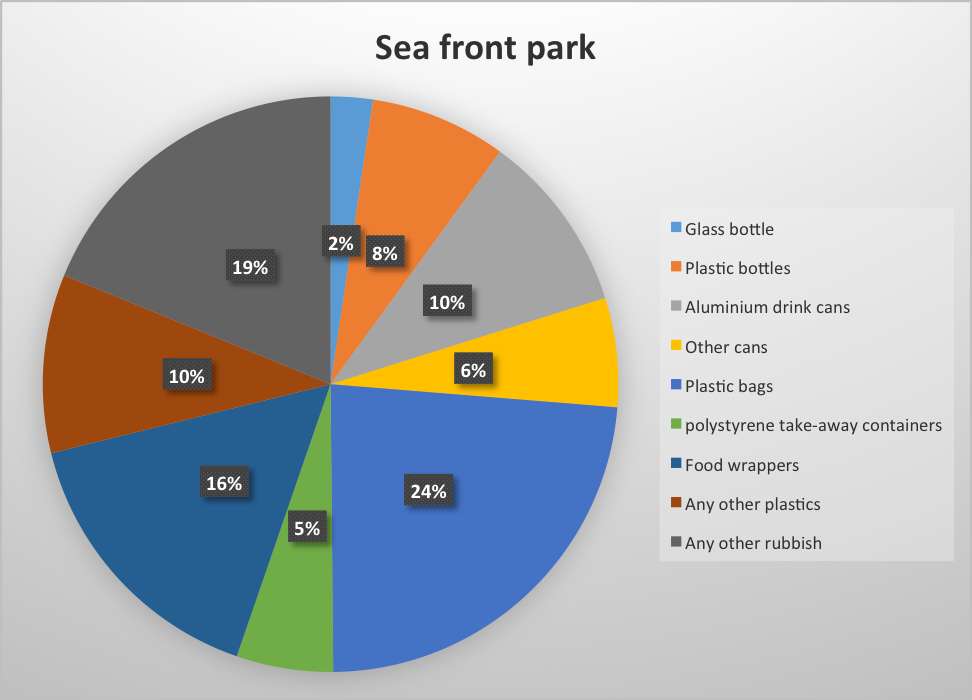 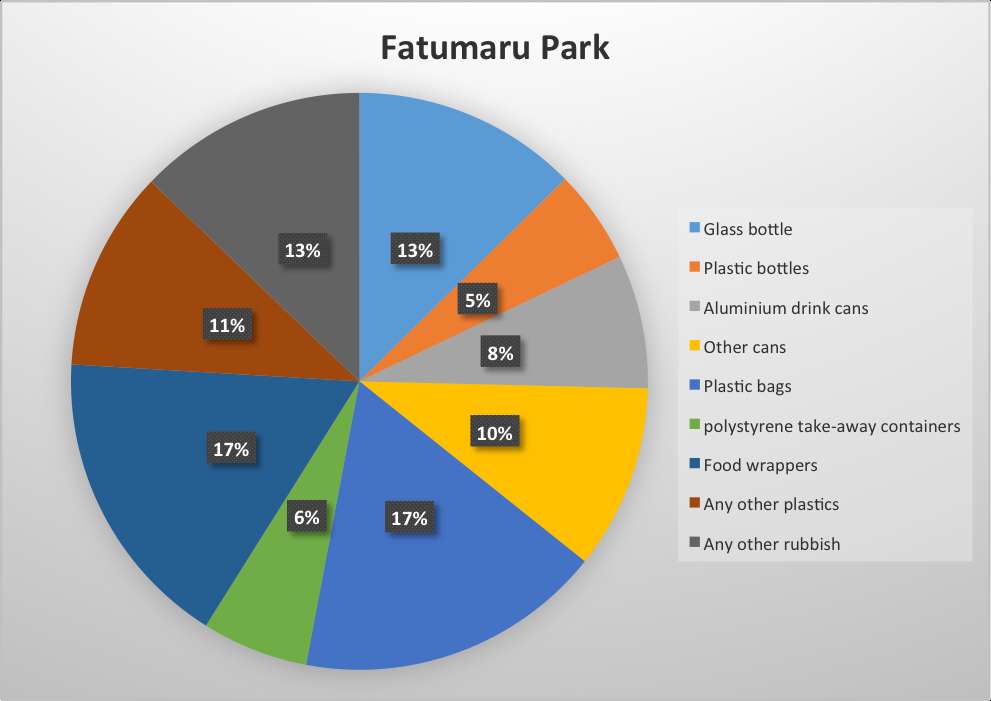 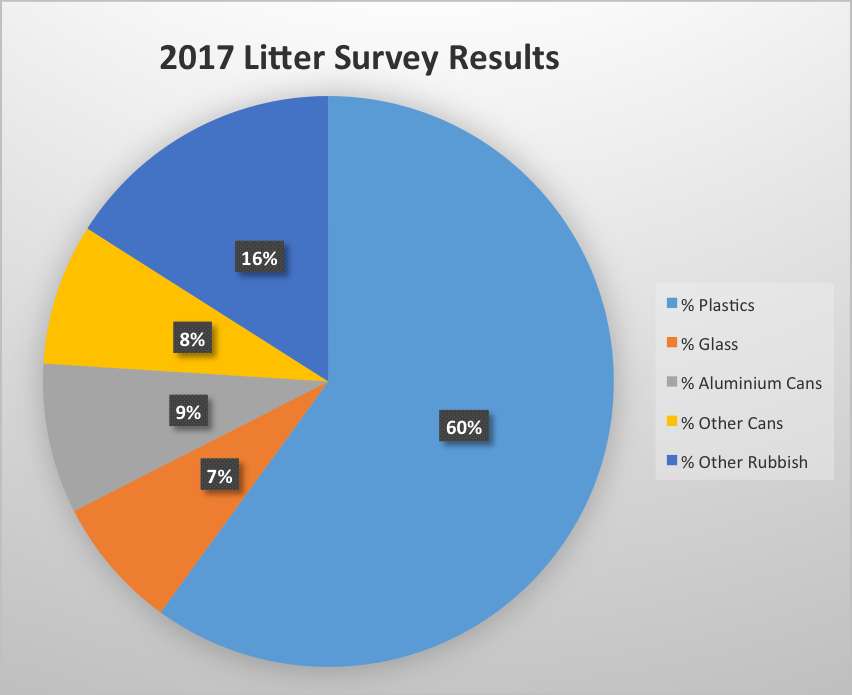 As you can see from the chart above the biggest proportion of rubbish was plastics. In this chart we have added up all the data from both the Seafront park and Fatumaru Park and looked at what the rubbish is made from. 60% of the rubbish is plastics. This is worrying.

Plastic is bad for the environment. Why is it so bad, you might ask? The number one reason it is so bad is that nature cannot break down plastic so once in the environment it will stay there forever. If you drop laplap leaves in your garden, after you have used them, they will rot down and the goodness inside them is used again by nature to grow a new plant. I am sure everyone is aware that if you do the same to a plastic takeaway container the same will not happen and if you went back a year or more later it would still be there.

Plastics lying on the ground look bad and therefore they reduce the appeal of Vanuatu as a tourist destination. It is not a welcoming sight for tourist arriving in our country to see plastic rubbish lining the roads and in our parks.

But is when the plastics end up in the sea that they really cause problems. And a lot of plastic is ending up in the oceans. A study published estimated over 5.25 trillion pieces of plastic are floating in the world’s oceans. Another study showed that 8 million tonnes of plastics are entering the oceans each year.

Plastics can smother corals and seagrasses killing them. Marine animals such as whales and turtles can get entangled in the larger pieces of plastic. Rubbish, mostly plastics, have been found in the stomachs of at least 690 different species of marine life. One study revealed that 90% of all marine birds had plastic in them and predicts that by 2050, 99% of seabirds will have plastic in them. There are more and more reports of whales dying and washing up on beaches with their stomachs full of plastic.

This is the second litter survey VESS has conducted during National Environment Week. The first in 2015 was also conducted in Fatumaru Park so we can compare the results. There was no survey done here in 2016 as the park was a construction site for the beautification of the seafront project. As you can see from the chart on the right the total number of items of rubbish collected in 2017 was less than the total collected in 2015 in Fatumara Park. There was a 22% reduction in the amount of waste collected. As we only have figures for 2 years we cannot draw any conculsions from this or call this a downward trend. But we can be hopeful that the message about the damage from littering may be being heard. Several factors may have contributed including the fact the park has undergone a redevelopment including the addition of litter bins. Greater awareness and talk on social media about littering and the use of plastic bags may also play a role. But as you can see from the survey there is still a lot of litter in the parks despite that fact that there are litter bins provided. Our main concern, other the litter detracting form the beauty of the parks, is that these parks are right on the waterfront. Litter dropped in the parks will mostly likely end up in the ocean and as mentioned above marine litter is causing many problems from our marine life. 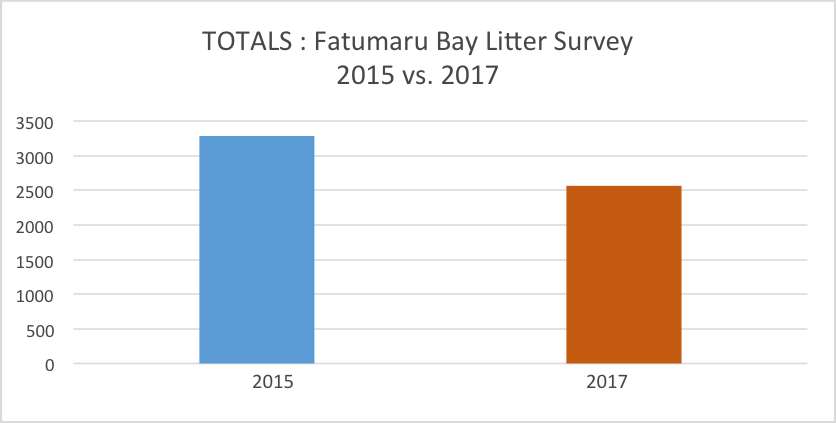 There is still a lot of rubbish collecting in our public parks in Port Vila. There is still a lot more work to do to keep our green spaces clean and to protect our marine life from harmful litter that gets washed into the sea. Every time you go shopping, ask yourself “do I really need a plastic bag for that?”. If you are a shop assistant think about how many plastic bags you are giving out – would less work just as well? If it is just one item do you need to out it in a plastic bag? If you have finished with your food wrapper or bottle make sure you put it in a rubbish bin so it doesn’t scare away tourist or damage our oceans.

Due to popular demand we are screening the Ocean Film Festival for a second...
Scroll to top