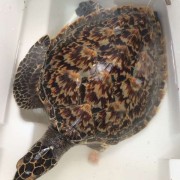 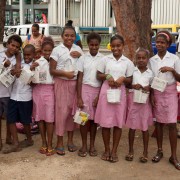 VESS assisted the Department of Environmental Protection and Conservation to organise events for this years National Environment Week.

This year’s theme for World Environment Day was “Seven Billion Dreams. One Planet. Consume With Care.”

Some of the highlights of this year’s National Environment Week were as follows: The week started and ended with a planting of Sandalwood seedlings plantings. These plantings are a small part of the rebuilding of Vanuatu after cyclone Pam, as many trees were lost. It was also part of the initiative to create a Sandalwood city in Port Vila.

On the Saturday, ‘Clean Up Your Environment Day’ VESS conducted litter survey to see what type of litter is affecting our streets. Divers also collected litter from the sea. Communities were encouraged to hold their own cleanup days throughout the week. Big Blue hosted an underwater photo competition and some amazingly beautiful creatures living just off the seawall were captured through the lens. But these creatures are at risk from the litter on the streets that is being washed down the drains and into the sea. Tuesday was a ‘No Plastic Challenge Day’ – it is hard to live without plastics but we encouraged people to say no at least to plastic shopping bags. Kawenu School Children demonstrated that there are alternatives to plastic shopping bags and made bags out of old newspapers. One evening there was a short film night showing some confronting and inspiring short environmentally themed films.

We went one stage further with our litter clean up by conducting a litter surveys. We counted each piece of litter we collect and noted what type of litter each piece was. This gives us some data about what sort of litter is littering our streets and seashore. 5126 pieces of litter were collected over 4 locations. The vast majority of the rubbish was plastic bags and plastic food wrappers as well as aluminium drinks cans. It was observed, during the survey at Fatumaru Park, that the litter was most concentrated around the seating areas in the park. This data can be used to highlight the problem of plastic litter in Port Vila.